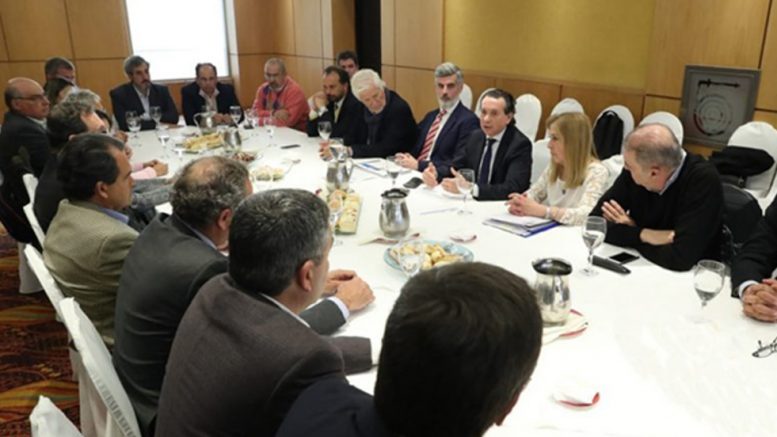 On August 7, in the framework of the plenary of the Mining and Lithium meeting, the Minister of Production and Labor of the Nation, Dante Sica, said: “We work to develop a sustainable, environmentally friendly and generating mining quality employment”. The meeting was held in the city of Salta, where Minister Sica also met with chambers and academics through the Mercosur – European Union agreement, and with local businessmen.

The minister was accompanied by the Secretaries of Employment, Fernando Premoli; of Mining Policy, Carolina Sánchez; Undersecretaries of “Compre Argentino” and Supplier Development, Sergio Drucaroff and Foreign Trade, Federico Lavopa.

In addition, the Minister of Production, Labor and Sustainable Development of Salta, Graciela Cid, the national senator Juan Carlos Romero, the provincial deputy Gladys Moisés, and the national deputy Miguel Nanni were present.

“The mining industry must consolidate itself as one of the engines for the balanced development of the different regions of the country in which this activity has its own natural advantages,” said Sica and highlighted the potential of the sector: “It has a strongly federal character, it represents an important source of employment and is also essential for local development, and the momentum of suppliers in the region.”

In this line, he valued the sectorial meetings as “a very important instrument to advance in improvements in the levels of competitiveness, in times of change and transformation” that enable “to solve issues that, due to the bureaucracy and the complexity of the national public spheres and provincial became barriers that did not allow progress ”.

In the medium term, in the period between 2019 and 2024, the country has the opportunity to realize the most advanced or under construction projects, which would involve investments of more than US$18 billion, mainly in copper, lithium, gold and silver. In this way, 2023 export levels of more than US$6 billion could be reached, and in 2024 of more than US$9 billion.

Within the meeting framework, the project called “PRODEPRO Agreement Mining 2030” was presented, a commitment whereby mining companies will present their supply plans so that suppliers in the sector can have relevant information with greater predictability about their demands .

Its application will favor the development of the industry in general, and of the mining value chain in particular, who will be able to achieve quality standards that allow them to become global suppliers.

The meeting revolved around the axes of infrastructure, labor aspects, productive development, local development and other competitiveness factors.

Be the first to comment on "The Minister of Production and Labor visited Salta, headed the Mining and Lithium meeting"