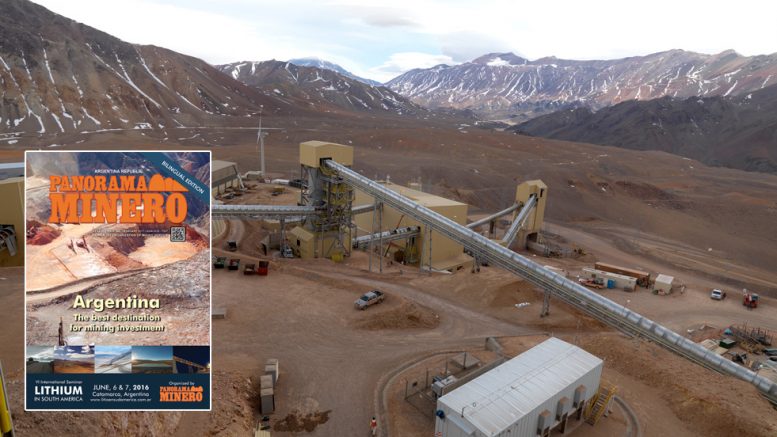 The Argentine mining policy has taken a meaningful turn by the hand of President Mauricio Macri.  Macroeconomic and industry promotion decisions renew legal security. The conjunction of certain variables including respect for investments, geologic wealth, supplier development, human capital and social license are helping position Argentina as one of the countries with the greatest projection into the world mining arena.

After more than one year of President Mauricio Macris’s administration, a period that served the purpose of encouraging investments in Argentina through relevant measures including the removal of withholdings on mining exports, Argentina has come back to mining investors’ radars.

In the context of a world that is starting to read the new geopolitical dynamics, Argentina has once again, the historic opportunity to show that not only is it a country with great mining potential, but also that this potential can get realized by the exploitation of its geologic resources. Plenty of examples of this do not date back long in our history and nothing would signal that continuing on the path traced as little as two decades ago could not be achieved.

In light of the undeniable reality of the slow yet sustained depletion of mineral resources and a growing population demanding significant volumes of minerals and metals for better life quality, Argentina emerges as one of the ideal destinations for mining investments. Geological potential is a necessary requirement and so is legal security, the tool that enables designating funds within a framework of capital respect and intangibility in order to develop prospecting and exploration activities.

The success of a mining destination is the result of the seamless combination of different factors. Argentina is one of the few jurisdictions that meets the most demanding requirements made by mining investors, and is one of the players with the highest projection possibilities in the next few years.

Argentina’s subsoil, which bears substantially all existing minerals, is almost a virgin soil – nearly 80% of the territory with mineralization potential has not been surveyed, thus opening a window of opportunities to venture in a wide geography, including precious metals (gold and silver), non-ferrous metals (copper, lead and zinc), ferrous metals (iron), nuclear minerals (uranium), rare earths, lithium, potassium, lime, cement and industrial minerals. Argentina’s mining offer is characterized not only by its diversity, but by the combination of quantity and quality and, according to experts, the country’s geology is full of surprises with discoveries that continue to amaze both local and foreign players.

Argentina is located in the area of the greatest concentration of exploration funding: according to the MetalsEconomicGroup, Latin America, including countries such as Chile, Mexico and Peru, among others represents 25% of world’s money supply. In this region with big competitors, Argentina has been able to gain its place over time.

The start of production of Bajo la Alumbrera (Glencore) in the ’90s may be deemed the “D-Day” of Argentina’s mining industry. This copper and gold deposit earned a spot among the main suppliers of these minerals and launched Argentina into a territory unknown up to then: global mining.

Later on, Cerro Vanguardia (AngloGold Ashanti) with gold and silver mineralization in the southern end of the province of Santa Cruz, in a prolific area known as the Deseado Massif, and Salar del Hombre Muerto (FMC Corporation) in Catamarca confirmed Argentina’s status as a Mining Country, and in the second case, this project positioned the country as one of the largest lithium producers jointly with Chile and Australia, a trend that would be further deepened over the following years. Already in the Third Millenium, Veladero (Barrick), Casposo (Austral Gold) and Gualcamayo (Yamana) in the province of San Juan, as well as Cerro Negro (Goldcorp), San José (Hochschild), Manantial Espejo (Pan American Silver) and Lomada de Leiva in Santa Cruz (Patagonia Gold), the resumption of opeations at mina Martha (Hunt Mining) and the Pirquitas mine (Silver Standard) in Jujuy have consolidated Argentina’s role as a precious metal producer.

Beyond productive centers, Argentina boasts an attractive portfolio of projects with varied degrees of progress throughout its geography. In the northwestern region, the province of Salta has a rich history of borate production, to which the construction of the gold mineralization Lindero project (Fortuna Silver), with feasibility studies already performed and all the required permits obtained, will be added in the short term. The giant Taca Taca (First Quantum) copper project should be added to this list, and it’s been defined as one of the main undeveloped deposits of this mineral with clear association to the large copper mines in northern Chile. The operator has made public its intention to start Taca Taca construction in 2018.

With its service life coming to a close, Pirquitas mine (Silver Standard) hopes to continue its operations based on the potential integration of the Chinchillas deposit (Golden Arrow). The agreement signed by both companies would enable a joint development that would continue to benefit all involved parties, in both the public and private sectors.

Lithium deserves special consideration. Part of Argentina is located in the so-called “Lithium Golden Triangle” a position that it shares with Chile and Bolivia and where 80% of the world’s known resources of this strategic metal have been measured. The production start at Olaroz (Orocobre) in Jujuy shows Argentina’s growing importance in the concert of lithium producers, because this is the first production center in the world to come into production in two decades.

Some specialists have predicted that Argentina’s future would be linked not only to precious metals. This observation is further strengthened when considering the copper potential of the mid-western area, most specifically the province of San Juan: El Pachón (Glencore), Los Azules (McEwen Mining) and El Altar (Stillwater Mining), and the new binational project Constellation, operated by NGEx Resources Inc. (including Josemaria deposit in San Juan province and Los Helados deposit in Chile) lead us to think that San Juan may fully revalidate its role as Argentina’s leading mining province.

Over the past year, two giant companies began to ramp up activities after having their respective construction activities halted. The first one of them is Pascua-Lama project, where the operator, Barrick Gold, has recently started studies to assess the economic and technical feasibility of developing Lama using underground mining, which means the whole project has to be restructured and reformulated.

On the other hand, in last September 2016, Vale and Mendoza province’s government signed an agreement for the company to undertake the re-engineering of the Potasio Rio Colorado Project for the purpose of analyzing the possibility to have some more investors in the project and reduce the original production capacity from 4 MT to approximately 1.3 MT thus slashing logistics and energy costs as well. Vale has selected Hatch as the engineering company. In December 2016, Vale announced the sale of its Fertilizers Unit to Mosaic, a company that has also acquired the option to include Potasio Rio Colorado in the transaction after economic and financial analyses are conducted to establish its overall profitability.

Finally, the Deseado Massif in the province of Santa Cruz has consolidated its position as a precious metal producer; productive centers are being furthered by the current construction of Don Nicolás (CIMINAS) and Cerro Moro (Yamana), and advanced exploration activities in La Josefina and La Valenciana (Hunt Mining).

Included in a wide array of financial tools oriented to markets, the mining sector has regained its position as one of Argentina’s most attractive industries. President Eng. Mauricio Macri states that the mining industry is one of the economic pillars, knowing of its significance for regional economies and its impact on the balance of trade.

Some of the measures taken include exchange rate unification; the elimination of restrictions to imports of critical goods and equipment for the mining industry; and the elimination of withholdings on exports of both metal and non-metal bearing minerals.

The National Administration, represented by its Mining Secretary, together with the provinces, gathered in the Federal Mining Council (COFEMIN), have approved an instrument called Federal Mining Agreement. This document shall be turned into law after being signed by the President of the Nation and all the governors involved. Over more than a decade, some provinces passed statutes restricting mining activities thus generating legal uncertainty. The Federal Mining Agreement has arrived to offer certainty and confidence for decision making to investors who often earmark their funding to jurisdictions offering adequate legal security.

This set of measures reflects the commitment of President Macri’s administration with a critically significant industry and enables Argentina to reposition itself in the regional and international competitiveness environment.

In its short but thriving mining history, Argentina has managed to develop a network of suppliers who can meet the challenges posed by mining operators, which are demanding and require compliance with the highest international standards. As opposed to what many would have thought, Argentina has been able to develop a range of suppliers that operate according to excellence principles, leading many of them to successfully participate in highly complex and competitive markets such as Chile and Peru, countries that have had a well established supplier network for decades.

In addition, and as a differential factor, Argentina has highly qualified Human Capital with relevant know-how, with professionals graduated from universities and highly skilled technicians that perform specific tasks (truck and other vehicle driving; explosive management).

Mining, as a state policy aimed at transcending time and different government authorities, has gained a significant role in the current administration. In our main mining provinces, this industry is also a state policy – San Juan, Salta, Jujuy, Catamarca and Santa Cruz have taken on the commitment to facilitate the growth of an industry that offers development opportunities to all citizens by way of several promotion policies, and this fact is reflected by the social license enjoyed by mining, as communities have accepted and recognized its benefits and have given it their seal of approval.

The combination of geologic wealth and legal security marks a significant difference in Argentina’s potential as compared to other jurisdictions. The doors to new opportunities have opened again as a result of the change occurred at the national level with direct repercussions on the provinces, the legal owners of the subsoil.
Change and transformations are here to stay. Argentina opens its doors to international investors so that they can allocate funding to the different minerals that abound in our country.

To sum up, there’s no doubt that for Argentina’s mining, the best is yet to come.

Be the first to comment on "Argentina, an ideal mining investment destination"