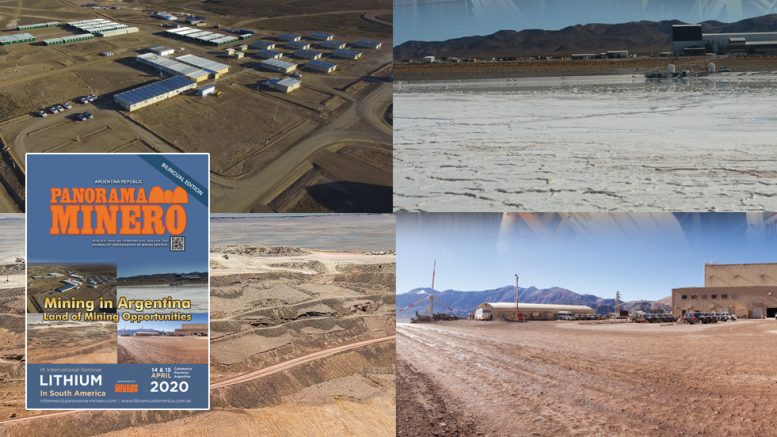 In the 1990’s Argentina was considered the “ultimate mining border in the world” which, coupled with a favorable legislative framework, attracted an inflow of venture capital earmarked for mining exploration and development. Accompanied by staunchly upheld state policies, many new deposits were uncovered or, where already known, got better defined, which led to their becoming busy operating centers or attaining significantly advanced stages. After two decades, our country continues being considered an attractive investment destination, thanks to the diversity of minerals and metals hosted under its surface. This statement acquires greater importance when considering that more than 70% of Argentina’s areas with potential mineralization have not been subject to prospecting yet.

The arrival of mining investment, encouraged by economic and political measures, allowed the regional development of communities that until then had been lethargic, with the subsequent positive impact over their areas of influence. The economic impact goes beyond the borders of those communities and becomes a significant generator of resources at the municipal, provincial and national levels as a result of various taxes, rates and assessments. With a contribution of US$3.45 billion, mining turned out Argentina’s 6th export set in 2018, representing 5.6% of total exports. It is worth mentioning that 95% of these exports originate from just 4 provinces –San Juan, Santa Cruz, Catamarca and Jujuy- where the mining industry accounts for over 50% of exports.

According to reports of the National Mining Promotion Directorate (Dirección Nacional de Promoción de la Minería) during the last edition of the International Conference “Argentina Gold & Silver”, organized by PANORAMA MINERO in November 2019, the various mining projects in Argentina, as at October 2019, stood at the following stages of development:

Exploration budget performance in the period 2000-2019 – Lithium, the boom of the past five years

As can be seen in Chart 1, exploration activities in Argentina have evolved in consonance with the price of commodities: the industry’s growth experienced strong deceleration since 2012, on account of a metal crisis, and started to regain momentum from 2015 on.

In the period 2000-2019 an aggregate US$3.8 billion have been invested in exploration budgets, with Canadian and Australian companies mostly involved. The analysis of the 2015-2019 evolution of exploration budgets, shows strong growth in gold participation but, more prominently, that of lithium, a commodity that became a big driver of Argentine mining development with significant prospects for the near future thanks to the multiplicity of its applications, mainly associated with green energy.

Over the past five years, the exploration budget in Argentina has grown 92%, and the most attractive commodities have been gold and lithium, as can be seen in Chart 2 and Chart 3, which explain exploration budget distribution by commodity for 2015 and 2019, respectively.

According to reports of the National Mining Promotion Directorate, the accumulated budget from 2015 to 2019 reveals that:

A significant note to keep in mind: the most representative projects in terms of investment which are in the most advanced stages are all associated with copper. The above reported 13% has been essential for some copper projects to advance to stages close to definition.

There is no doubt that the global transformation of the last decade opened up new opportunities for a large majority of minerals and metals. Technology advance has allowed mankind obtaining benefits in different key areas, including infrastructure, health and education. It is in this field where various metals may play a key role in the present and near future of world population, given that we have already entered a new era of renewable, clean, green energies. In this respect, copper and lithium are among the metals bound to play decisive roles. The former, known to humans since many thousands of years ago, is used for countless applications and devices, including wind energy, tidal power, and electric vehicles; and, together with lithium, in solar panels, while at the same time they are strategic allies in assisting every resource for energy storage.

Five years ago, Argentina had a strong base of identified resources; in many instances large copper projects had been measured more than a decade ago. The progress in reserve definition over the past 2 years concentrated on three projects: Agua Rica, Josemaría and Filo del Sol, which combined, account for 94% of national copper reserves.

As discussed above, lithium is playing an ever more decisive role in electro mobility and clean energies. In the fast moving race of the last decades, Argentina has been quite adept at leveraging the momentum of lithium demand which is growing at a stunningly frenetic pace. Found in few countries, lithium abounds in Argentina –through its provinces Catamarca, Jujuy and Salta- which, together with Bolivia and Chile make up the so called “Lithium golden triangle,” one of the richest areas for lithium resource identification. For this reason, the Puna’s salt flats exhibit competitive advantages for speedy development and entry into production of operating centers associated with this metal.

Argentina plays a significant role in the lithium sector, with two mines in production and planning expansion –Olaroz (Orocobre Ltd.) and Fenix (Livent Corp.)-, plus two other projects at construction stages –Cauchari-Olaroz (a Joint venture of Lithium Americas and Ganfeng Lithium) and Centenario Ratones (Eramet). With the addition of a dozen projects at Pre-Feasibility Economic Evaluation, Argentina has been a center-stage actor in the lithium arena of the past two decades, now adding significant prospects that would further emphasize its role in supplying a metal with so many applications and whose potential multiplies day after day.

Various discoveries in North Western Argentina (NOA) have allowed identifying a resource base exceeding 90 million tonnes of lithium carbonate equivalent (LCE), which means that, at current production rates, there is sufficient supply for more than 100 years.

Regarding lithium in Argentina, however, the Puna salt flats are not everything: the country has several pegmatite districts, 19 of them enriched with lithium, mostly located in the province of San Luis, and, to a lesser extent, in the neighboring province of Cordoba. At present, additional deposits in Catamarca and Salta are subject to study.

Charts 2 & 3 above show gold as the commodity with the largest presence in 2015 and 2019 exploration budgets, with more than 55% and 50%, respectively. Attraction to the search for gold has always been Argentina’s hallmark, and so is attraction to its so-called “little brother,” silver, which is also found in exploration budgets, although dwindling. It should be noted that the large majority of silver resources and reserves measured in Argentina are present as a by-product of gold; only a small group of projects with silver as main metal can be identified in the exploration radar, which most probably explains its decrease in exploration budgets.

One of Argentina’s mining industry icons are precious metal deposits. In this regard, eight projects have been launched over the past decades, a fact that is testament to our country’s potential regarding gold. In most of these operating centers, silver appears as a highly coveted by-product significantly helping reduce production costs.

On account of all of the above, Argentina can boast an interesting project portfolio at various development stages. Judging by the volume of ounces in its inventory, the Lama project stands out as the most attractive, leaving aside the fact that it is now at a re-engineering stage. In addition to the bi-national giant Barrick, a number of undertakings are placing their focus on the noticeable precious metals geological potential of Valle del Cura (San Juan) and el Deseado Massif (Santa Cruz) and their obvious interest to prospectors.

Finally, and in relation to silver, fewer than half a dozen projects pivot around this metal as primary resource, and they lie at quite far apart areas. On the one hand, the Navidad project (Pan American Silver), located in the province of Chubut, and on the other, Diablillos (Abra Plata Resource) and El Quevar (Golden Minerals), located in Salta, emerge as the big promises regarding silver metal. A change in state policies is needed for the Navidad project; only thus will the operation of one of the most attractive untapped silver projects in the world will be made possible.

As regards silver, the national mining authority released information on the progress of several projects:

As we said above, mining was the 6th export cluster in 2018 accounting for 5.6% of total exports. The commissioning of new projects –particularly for copper mining—can not only sustain these values but has potential to more than triple current exports: 2/3 of those additional exports would originate from just 3 copper projects.

Argentina still holds great potential for new deposit discoveries that may allow continuing its high mineral production. Over 70% of the national territory remains insufficiently explored, especially if new deposit models are considered. These natural endowments, together with public policies aimed at fostering mining development, continue to make Argentina one of the most attractive mining investment areas in the world.

Be the first to comment on "Argentina: geological potential attracts mining investment"