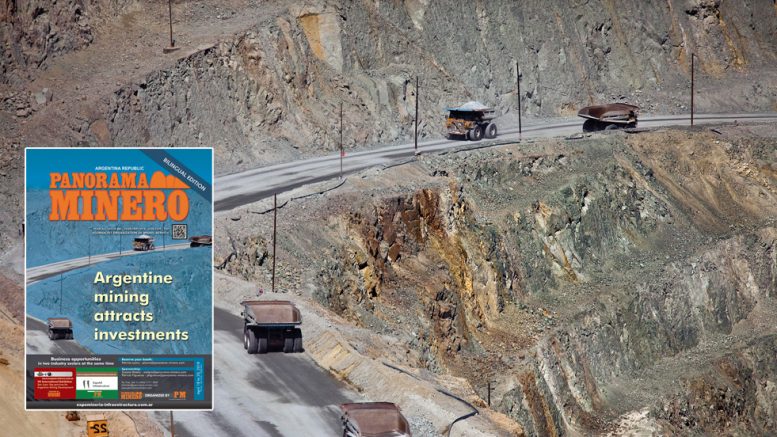 With a little over two decades of history, Argentina has managed to enter the big leagues of the world mining industry. The combination of geological wealth, regulatory framework and measures aimed at promoting investment has been the key to the arrival of capital to develop an industry that has shown just the tip of the iceberg. Accordingly, multi-million investments are expected for the upcoming years jointly with an increasing demand for minerals, both in terms of quality and quantity — a challenge that Argentina is poised to meet.

The consolidation of political and economic measures implemented by President Mauricio Macri’s administration have laid the foundations of the very much needed legal certainty for the arrival of capital to Argentina.

A significant driver for this new dynamics in Argentina’s mining industry has been the execution of the Federal Mining Agreement among the National State and the provinces which are members of the COFEMIN (Federal Mining Council). The agreement served as an instrument aimed at providing certainty for decision-making by investors, who invest money only in those jurisdictions with clear rules.

Lithium is another mineral in which Argentina stands out. Northwestern area provinces, as well as Chile and Bolivia, form the so-called “Lithium’s Golden Triangle”, a world area that hosts 80% of all known resources of this strategic mineral. Start of production at Salar del Hombre Muerto (FMC Corporation) was joined by the Olaroz operation, managed by Australia-based Orocobre.

According to reports by the SEGEMAR (Argentinean Mining Geological Service), this is a highly rich area with great potential and a large percentage is still unexplored. This salt flat region is located at the lithium triangle, including Argentina’s Northwestern (NOA, Spanish acronym) area, Bolivia and Chile. In less than 10 years, the NOA’s geological potential has swiftly shown that it can offer to the world a commodity in ever growing demand.

The potential of salt flat lithium resources in nine projects –Cauchari, Olaroz, Rincón, Fénix, Sal de Vida, Antofalla, Mariana-Llullaillaco, Tres Quebradas and Sal de los Ángeles (Diablillos)- has enabled the identification of approximately 60 MT of lithium carbonate, which could provide the supply for almost 150 years. Argentina has been the most dynamic producing country with an increase from 11% to 16% of its market share in the lithium by-product market. In addition to salt flat potential, the country has several pegmatitic districts: 19 with lithium enrichment which are mostly located in the province of San Luis, with lower numbers in the province of Córdoba and others under study in Catamarca and Salta (Refer to Table 1).

The extensive mountain range that Argentina shares with Chile has shown that there are no natural boundaries: many of the world-class mineralization systems located in the neighboring country are somehow extended to Argentina. There are many examples of this, with copper being the most relevant. However, Argentina’s potential in relation to the red metal is not only limited to projects located near Chile.

Argentina is one of the countries with the highest potential in undeveloped copper projects. Based on data from the National Mining Development Undersecretariat, our country has 57 MT of fine copper (in the measured and indicated resource categories, and proven and probable reserves) in the 10 most advanced projects. These copper bearing bodies are joined by a significant amount of minerals as by-products: 38 Moz of gold, 776 Moz of silver, and 1.3 MT of molybdenum. More detail about these projects may be found in the Table 2 below.

In relation to precious metals, Argentina has outstanding examples in different stages of development. In terms of gold, the biggest bet is the development of the Lama project (Barrick Gold), which is under review for the possibility of using underground methods. As to silver, great expectations are placed on the Navidad project (Pan American Silver) located in the province of Chubut, a jurisdiction that currently doesn’t allow mining development, but which has recently started discussing the topic and thus there’s the hope that there might be a change of path.

Argentina still has great potential to discover deposits that allow keeping high mineral production. Over 70% of the national territory is underexplored, especially in terms of new deposit models. 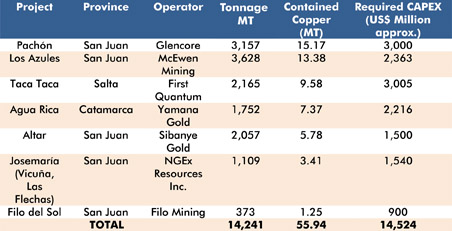 Beyond geology and any government measures aimed at fostering investment, we should highlight two characteristics that have positioned Argentina as one of the best investment destinations: the development of a highly qualified supplier chain, with providers who know the geography and logistics involved in mining development, as well as highly qualified human resources, mostly educated at universities and technical schools located in the same jurisdictions where the mineral resource is found.

Against the backdrop of a world that is beginning to interpret the new geopolitical dynamics, Argentina again has the opportunity to show that it is not only a country with mining potential, but that such potential may become a reality by enhancing geological resources. Recent history has shown abundant examples of this, and there’s no indication that the country may not continue moving along this path that began a little over two decades ago.