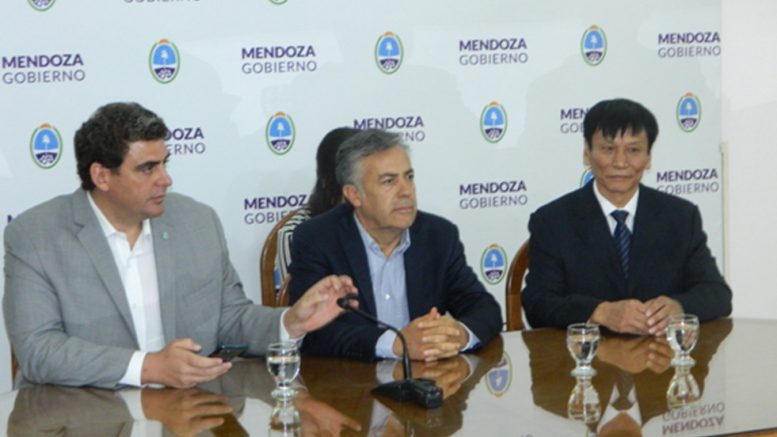 “This visit, which arises as a result of the mission to China led by Minister Kerchner, has a very high importance for the province: I believe that not only for his government but for the people of Mendoza because it is reactivating one of the emblematic projects of our mining industry, Potasio Río Colorado, in the south of the province. That project was frustrated in previous governments and we have been working to reactivate it. It has not helped the international price of potassium, the general conditions of our country; but they are those projects that, regardless of the conjuncture, require a strategic view because they are medium and long-term investments. China has that long-term look and has seen the potential that until now was not seen in that particular mine. ”

At the press conference, the Governor of Mendoza was accompanied by Professor Wei Changguang, Director of the Shanghai Potash Engineering Technology Research Center, the leading potassium specialist in China and one of the leading specialists in the world. “It shows the seriousness of the Chinese government with regard to this project. It encourages us to reactivate it this time” Cornejo said, adding that in the following days there would be visits to San Rafael to make contact with technical aspects and the mine to work until Saturday.

On a more specific level, the Minister of Economy, Infrastructure and Energy of the province of Mendoza, Mr. Martin Kerchner Tomba, added: “We had a contact with Professor Wei Changguang and all his team in the mission we did in Southeast Asia, and we found that they knew about the project and had already had contact in 2008. We told them that our intention was to reduce the project to make it more viable, and get some doubts that have to do with energy, logistics and other elements. We saw interest from Professor Wei Changguang, and his task will be to do a technical verification to establish the viability of the project. The opinion of the Institute is very important to be able to relaunch the Potasio Río Colorado project, since it is subordinated by a Chinese organization that authorizes companies to invest outside of their country. “

Be the first to comment on "Alfredo Cornejo, Governor of Mendoza province: “There are serious intentions to reactivate and invest in Potasio Río Colorado"