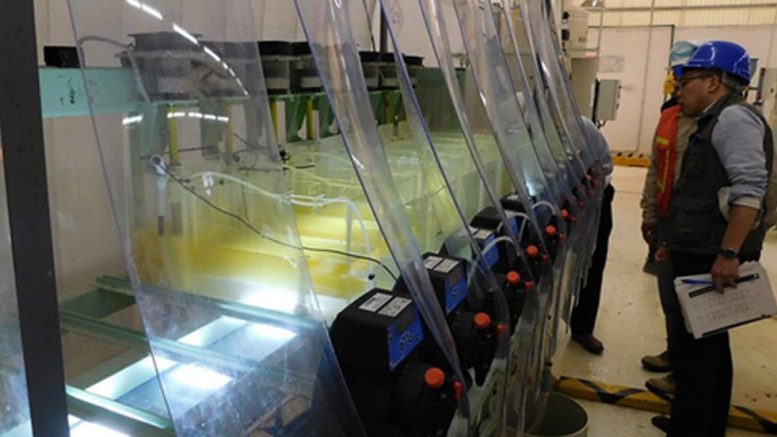 The in-situ brine comes from the high-grade northern sector of the 3Q Project salar, with an initial chemical composition as follows:

The brine was evaporated in the industrial scale ponds at the 3Q Project salar under similar conditions that would occur during production scale ponds. Final concentration took approximately six months to reach the point to be used as feed material to the pilot plant. No chemical reagents were added to the brine other than minor amounts of hydrochloric acid (HCl) for ph control at the final stage of evaporation. The concentrated brine chemical composition was as follows:

The concentrated brine was then transported by truck to the pilot plant located in Fiambalá, which is located 160 km from the 3Q Project salar. The Company’s lithium carbonate pilot plant, which was built by the Instituto de Investigaciones Tecnologicas from Universidad de Concepcion, Chile, has been operational since May 2019 at Neo Lithium’s Fiambalá facility. The pilot plant has a designed capacity of 40 tonnes of lithium carbonate per year.

The concentrated brine was then processed with a solvent extraction phase (SX-B) for boron removal, a sulfatation phase for calcium removal and a liming and carbonation phase to remove magnesium and any remaining calcium. The lithium carbonate process is then completed with three stages of soda ash carbonation, washing and drying.

“Producing lithium carbonate with this purity level in our first batch is due to the hard work of our technical team and the results of our proven upstream pilot pond system we have implemented,” stated Waldo Perez, President and CEO of Neo Lithium. “This is not a bench scale study; this is real life field conditions for evaporation at the project site and 1:500 scale pilot plant testing in Fiambalá obtaining high purity lithium carbonate in our first attempt. We have now proven our concept, and now we have our focus on the production of battery grade lithium carbonate production during the Q4 2019.”

Despite the high purity obtained for the lithium carbonate after the first batch, the Company considers this first batch as technical grade because some impurities need to be below specific thresholds or industry specifications for the Company’s goal of producing battery grade lithium carbonate. The Company will continue to fine-tune the process, reagents and operations to obtain battery grade in early Q4 2019.

Be the first to comment on "Neo Lithium Produces 99.1 % Lithium Carbonate in the First Batch from its Pilot Plant"