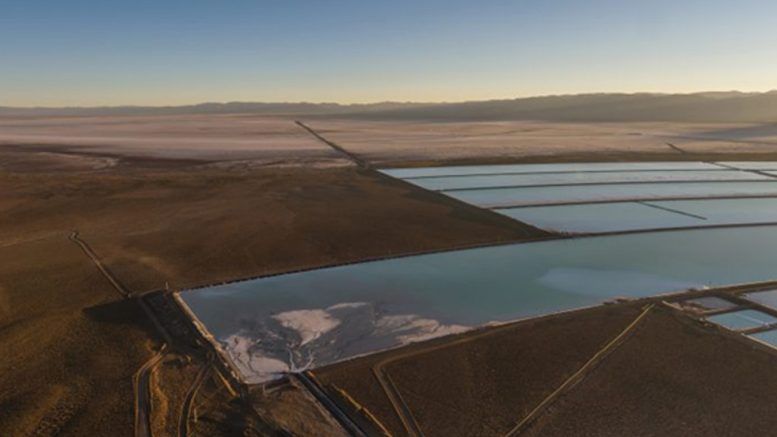 Orocobre Limited advised that Orocobre, Toyota Tsusho Corporation (TTC) and JV boards have given approval to the Final Investment Decision (FID) for the Stage 2 Expansion of the Olaroz Lithium Facility in Jujuy province.

The Stage 2 Expansion will increase lithium carbonate production capacity by approximately 25,000 tonnes per annum (tpa) bringing total Olaroz production capacity to approximately 42,500 tpa. Stage 2 will produce technical grade (>99.0% Li2CO3) lithium carbonate, part of which will be utilised as feedstock for the proposed Naraha Lithium Hydroxide Plant to be built in Japan.

During the development of Stage 2, the Stage 1 plant will progressively migrate to 100% battery grade lithium carbonate production.

Upon achievement of full production rates, the product distribution post Stage 2 is expected to be:

Construction of key items for the Stage 2 Expansion such as ponds, roads and camp upgrades has already commenced and to date has been funded from operating cashflow. The revised total capital expenditure for Stage 2 is expected to be US$295 million including US$25 million contingency. This estimate excludes the crystalliser/evaporator project which would operate for both Stage 1 and Stage 2 on which feasibility studies are currently being undertaken. The expected cost of this project is approximately US$15m and will be subject to normal joint venture capital approval processes in due course. Financing The Stage 2 Expansion will be funded by a combination of project debt, operating cashflows and shareholders loans. US$180 million of project finance is anticipated to be provided by a Japanese Bank on similar terms to the Stage 1 project finance facility. The Stage 2 project finance facility is expected to be secured in a similar manner to that of Stage 1 utilising a joint liability scheme provided by JOGMEC (Japan Oil, Gas and Metals National Corporation). The Stage 2 facility will have a term of seven years. Documentation is expected to be finalised to have the draw down available in Q1 2019.

Be the first to comment on "Olaroz Stage 2 Expansion, Final Investment Decision Approved"