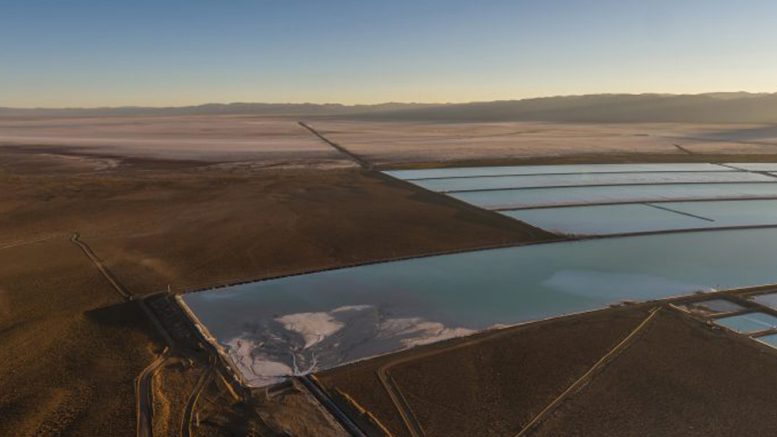 • Q4 FY19 production was 3,455 tonnes, down 4% on the previous corresponding period (PCP) following a strategy of managing brine quality, new pond preparation and slightly lower than average evaporation rates. Production for the year was up marginally from FY18 to a new record of 12,605 tonnes

• Quarterly sales revenue was US$27.8 million, down 17% QoQ (quarter over quarter) with a realised average price achieved of US$8,220/tonne on a free on board basis (FOB). June quarter product pricing was below that of the March quarter due to current market softness. Sales volume for the quarter was down 4% QoQ to 3,387 tonnes

• Gross cash margins (excluding export tax) of US$3,727/tonne were down 29% QoQ mainly due to the lower average price received; however the gross cash margin remains at a very strong 45% of revenue

• Cash costs for the quarter (on cost of goods sold basis) were US$4,493/tonne, up 7% on QoQ excluding the recently announced export tax of US$572/t.

• Construction of key items for the Stage 2 Expansion of the Olaroz Lithium Facility such as ponds, secondary liming plant, roads and camp upgrades have continued to advance.

• Overall sales volume for the June quarter was 11,758 tonnes, up 10% QoQ after deducting 2,312 tonnes of low value mineral sales in the March quarter

• Sales revenue was up 12% QoQ and the average price received was up 3% QoQ (excluding the low value mineral sales).

Production for the June quarter was 3,455 tonnes down from 3,596 tonnes in the previous corresponding period. This was up 12% from 3,075 tonnes in the March quarter which was affected by rainfall that exceeded the same period in 2017 and 2018 and resulted in the dilution of brine feedstock.

Sales were 3,387 tonnes of lithium carbonate with a realised average price of US$8,220/tonne on an FOB basis and total sales revenue of US$27.8 million. The average price received during the quarter was down 13% QoQ. Prices achieved in the seaborne market remained under pressure by Chinese exporters.

The operational strategy continues to focus on safety and quality. Special attention is being devoted to improving the lithium grade of brine feedstock – “brine quality”. Improved brine quality has multiple benefits including higher lithium recoveries and increased product quality and consistency.

Quality improvement projects have been implemented to improve product packaging which will address some customer requests. Plant equipment availability is also under review with the aim of decreasing plant downtime due to unplanned maintenance. A review of soda ash use has identified opportunities to reduce consumption through more detailed and frequent monitoring of soda ash dosage during processing.

Seven of the eight Stage 1 harvest ponds have now been cleared of harvestable salt which precipitated through the evaporation process. The final pond is currently being harvested. Pond harvesting enables the recovery of brine that is retained in the salts which can then be processed in the plant. With the increase in area from development of Stage 2 ponds, future salt harvesting will become a continuous process where ponds are harvested on a rotational basis over a three-year cycle.

The Stage 2 Expansion of Olaroz is fully funded with cash and a proposed US$180 million debt facility. A final review is underway on the debt facility documentation and this is expected to be completed in the September quarter. Under the terms of the January 2018 placement, Toyota Tsusho Corporation (TTC) and Orocobre agreed to provide non cash-backed guarantees for the finance facility. Also, under the placement terms, Orocobre agreed with TTC to hold US$135 million of cash in a separate reserve account whilst the guarantee is in place. The cash will be held in an interest-bearing term deposit by Orocobre and may be utilised for cost overruns and other defined events should they occur.

Upon formal completion of the project, 82.35% of the TTC/Orocobre guarantee will be replaced by a guarantee from the Japan Oil, Gas and Metals National Corporation (JOGMEC) and that proportion of the US$135 million cash will then be available for Orocobre corporate purposes.

Construction of key items for the Stage 2 Expansion such as ponds, secondary liming plant, roads and camp upgrades continued to advance during Q4 FY19.

As at 30 June, approximately US$40.3 million has been spent on the first phase of expansion activities including the construction of new roads, vegetation clearing, construction of new evaporation and harvest ponds, secondary liming plant and new boreholes.

During Q4 FY19 an invitation to tender was sent out for the design, construction and related earthworks for a number of new buildings required for the Stage 2 Expansion. All tenders are now under final review and will be awarded during Q1 FY20 – allowing for construction of the main buildings to begin before the next wet season.

Engineering and civil works for the secondary mobile liming plant were completed during the quarter, including the construction of concrete slabs and the delivery of tanks with installation continuing during the June quarter. The secondary liming plant will have the capacity to treat up to 300 l/s of brine.