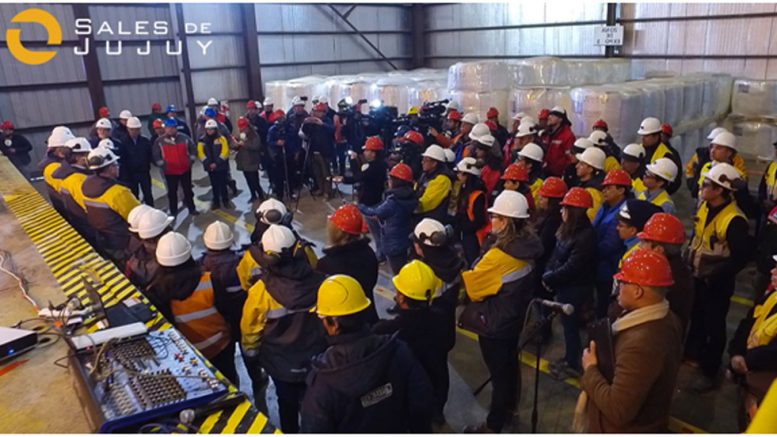 Sales de Jujuy, the local operating company of the Olaroz Lithium Facility (Olaroz) has hosted on 11th September the Governor of Jujuy, Gerardo Morales who conducted a press conference to discuss the Stage 2 Expansion of Olaroz, employment of local Jujuy community members and the promising future of lithium production in the region.

Commenting on the employment of local community members, Morales said “we should be proud of our work together with the communities and the large number of Jujuian operators working for Sales de Jujuy”, with special emphasis on the “high industrial technology we have for production”.

“They are working with an open mind to the world and that is what we want, that our products and their added value are exported and inserted into world markets,” he said, which ratified the direction and provincial commitment “to sustain this project, with all our effort and energy”.

The event was attended by Minister of Infrastructure, Public Services, Land and Housing, Jorge Rizzotti; the president of the board of Drinking Water of Jujuy, Víctor Galarza; the Secretary of Mining and Hydrocarbons, Miguel Soler; the Secretary of Indigenous Peoples, Alejandra Liquín; the President of JEMSE, Carlos Oehler; Managing Director and CEO of Orocobre, Martín Pérez de Solay; Chief Operating Officer, Hersen Porta; Sales de Jujuy General Manager of Operations, Francisco Torres; together with workers and technical staff from Olaroz. It should be noted that journalists from all over the province of Jujuy visited the Sales de Jujuy facilities.

Be the first to comment on "With an investment of US$295 million, Sales de Jujuy began the expansion phase of Olaroz project"