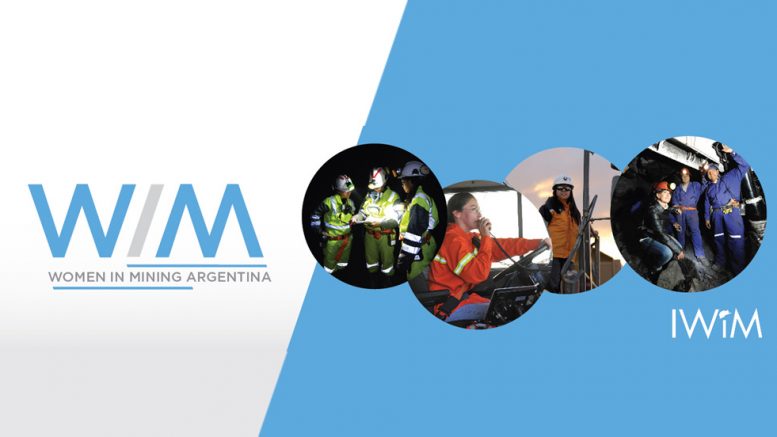 On June 24, the main organization of mining women in Argentina was officially launched with the attendance of 378 people and the participation of relevant people from the industry and other sectors of the government and business areas. Throughout the meeting, held in virtual format, WiM Argentina presented the axes of its organization, and its’ CEO, Celeste González, pointed out that “this is a special day where we can announce, after so much effort, that we have an organization behind that represents us”. In addition, they called for “going through an opening path in which education and training have a great impact towards building an increasingly inclusive future.”

The event had the special participation of the Argentina’s Mining Secretary, Dr. Alberto Hensel, the undersecretary of Mining Development, Laura Rópolo, the undersecretary of Mining Policy, Sylvia Gimbernat, the national specialist of the Private Sector of UN Women, Verónica Baracat; the president of the Argentine Chamber of Mining Companies (CAEM), Alberto Carlocchia; Silvia Naishtat, agricultural engineer and journalist of Clarín newspaper; Gladys Smith, responsible for Latin America at International Women in Mining (IWiM), and the organizations ACME and FECOBA, represented by Adriana Garde and Elisabet Piacentini respectively. At the same time, the United Kingdom’s Ambassador to Argentina, Mr. Mark Kent, gave his support to the formation of the organization and, with a recorded message, commented that “this global initiative, which started 12 years ago in the United Kingdom, now has presence in more than 100 countries in the world and aims to promote greater participation of mining women; especially in leadership positions”

The Argentina’s Mining Secretary, Dr. Alberto Hensel, endorsed the current “cultural change” around the recognition of women in decision-making spaces and stated: “It has been clearly demonstrated that having more women helps us to have a better vision of what we must do and also to humanize each of the actions that are carried out. We understand that this growing insertion in turn makes us much more effective due to the commitment and intelligence of many women who, with their contribution, enable this and other industries to continue evolving. The Argentina’s Mining Ministry is the first organism of the National State that has adhered to the gender initiative promoted by the Inter-American Development Bank (IDB) and, in turn, in this mining portfolio, 70% of the decision areas are in the hands of women”.

Meanwhile, Sylvia Gimbernat transmitted the Nation’s Ministry of Mining experience in inclusion and development matters and said that “it is an enormous opportunity for a public body to join in establishing this issue in its administration, which was not considered in depth as it deserves. The gender perspective within the body is important, and we aim to move away from a binary perspective and replace it with an integrative vision”. In tune with these statements, Laura Rópolo, undersecretary of Mining Development, affirmed that “we have a mandate within the Ministry of Production where we are contributing ideas to promote an inter-provincial table in which mining and non-mining women can promote dialogue and exercise active listening to the needs of women today.”

From the Argentine Chamber of Mining Companies (CAEM), Alberto Carlocchia analyzed the state of affairs of the mining woman in Argentina and noted: “After more than 20 years in the industry, and seeing how female participation in the sector has grown, it is remarkable how much women add and bring to this activity with their professionalism and ability; and above all things with their passion in everything they undertake. The female contribution is very valuable and allows us to generate mixed teams where it is proven that we work more efficiently. Just as we have come a long way, there is still a long way to go. Today only 6.5% of mining jobs are occupied by women, and I think it is time to take advantage of different circumstances that technological advances are giving us around the generation of new spaces within companies”.

In parallel to the words of the representatives of the mining area, professional women and specialists from different sectors accompanied the inauguration of WiM Argentina with information of interest regarding gender equality in the workplace and the possibilities of expanding female participation in hierarchical roles and leadership. As coordinator of the Win-Win program, created by UN-Women and the International Labor Organization (ILO), with funding from the European Union, Verónica Baracat delved into the benefits of this implementation, which aims to promote “the business case for gender equality through the private sector” and increase the economic empowerment and leadership of women as the basis for sustainable, inclusive and equitable growth. “Gender equality is good business: economically it is good business. And when there are diverse teams, better decisions are made, with more productive and efficient companies”, Baracat stressed.

Silvia Naishtat, from Clarín newspaper, provided a reflection on her personal experience in the journalistic field and emphasized the importance of incorporating more women to the boards to advance institutional and corporate transparency: “Thinking about the business of mining, which is so questioned at the level of public opinion, I think that the contribution of women is the contribution to transparency, honesty and doing things well reinforcing good practices. This can be useful to make something that contributes to the generation of wealth such as mining a lawful activity that today has some questions. In this, the contribution of women in all industries has been key and will continue to be so. Women are committed to honesty and trust building, and it is necessary to continue supporting each other on this journey”.

With a marked multisectoral approach, the meeting concluded with the comments of Adriana Garde, gastronomic businesswoman and president of the Civil Association of Women Entrepreneurs (ACME), who emphasized permanent training as a strategic point for women in the professional field; and Elisabet Piacentini, specialist in small and medium companies and president of Women Entrepreneurs in the Federation of Commerce and Industry of the City of Buenos Aires (FECOBA), who accompanied this view and added that “each woman leaves a mark on her environment, because every time the woman advances not only does she advance, but also her family, her neighborhood and her community. ”

The closing remarks were delivered by three leading women and members of the global Women in Mining network. Gladys Smith, Head of International Women in Mining (IWiM) in Latin America, a non-profit organization founded in 2007, currently made up of more than 10,500 associates and more than 50 WiM organizations in more than 100 countries, referred to the importance of these initiatives to channel the needs of women around the world, and stated that the purpose of this international organization is the materialization of opportunities for women in the mining industry: “We act honestly and are guided by ethical and moral principles in everything that we make. We work with our colleagues in a spirit of solidarity, respecting diversity and differences along the way, fighting for a more just and free system. We work transparently and responsibly use our resources in all our collaborations, promoting the creation of groups around the world willing to collaborate in this quest towards a more diverse and heterogeneous mining. ”

Lastly, on behalf of Women in Mining Argentina, Silvia Rodríguez, President of the Organization, and Marita Ahumada, Director of the Advisory Committee, highlighted the effort of the Argentine mining women in the consolidation of the entity and the more than 10 years of journey to achieve the conformation of WiM. “We have many initiatives ahead of us that encourage us to build together, with all sectors, a more committed mining industry. Each one from her place and working together, this is how we can contribute to the growth of our country and the companies that work in our territory for the benefit of the entire community”, said Rodríguez, who serves as manager of Shared Value at Orocobre, in line with the words of Marita Ahumada, who concluded that “we work for mining but not for mining at any cost: we think and work for responsible mining that cares for the environment, the physical and biological environment, people and to the communities. In this group we want to include all those who want to participate, not only do they have to be women, and they do not only have to be professionals,” he said.