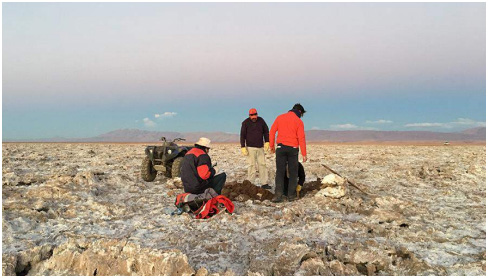 “From the outset our model indicated that lithium brine targets in the centre of the Arizaro basin would be deep,” said Nikolaos Cacos, President and CEO. “Our initial program was limited to about 400 metres depth and it did not reach the aquifer. This survey will give us a better model of the depths below 500 metres so we that can plan a follow-up drill program.”

The initial 3-hole drill program completed in 2017 encountered low levels of brine at depths up to 356 metres, and individual samples returned up to 257 mg/L lithium and 14,653 mg/L potassium. Hole AR-01 ended at 398 metres in sand units considered promising for hosting a brine aquifer.

The survey will consist of three East-West lines, each 13.5 kilometres long, plus two North-South lines of 10 and 20 kilometres each. The CSAMT sounding will have a spacing of 500 to 1000 metres. The investigation depths of the CSAMT method in this environment should provide information below 500 metres from the surface.

On March 13th, 2018, the Company announced the commencement of its first drill program at the Incahuasi salar (northwest of Catamarca Province) .The program was budgeted to include up to 4 diamond drill holes to depths of approximately 400 metres. The holes are designed to test two highly conductive domains identified by a Vertical Electrical geophysical survey (VES), and interpreted as brine bodies, along 12 kilometres parallel to the long axis of the salar. To date, two holes have been completed to depths of 300 and 190 metres respectively. The third hole is still in progress, and has passed 200 metres depth. Brine samples are being submitted for analysis on a batch basis, and results will be published at the end of the program when all analytical results are received and interpreted.

Be the first to comment on "Argentina Lithium: Deep Geophysical Survey at Arizaro Project"