During 6th and 7th of June, the province of Catamarca was host of the Sixth Edition of the International Seminar “Lithium in South America”, organized by PANORAMA MINERO magazine. This seminar is a reference related to the lithium sector, not only in Argentina, but also in the other countries like Chile and Bolivia. 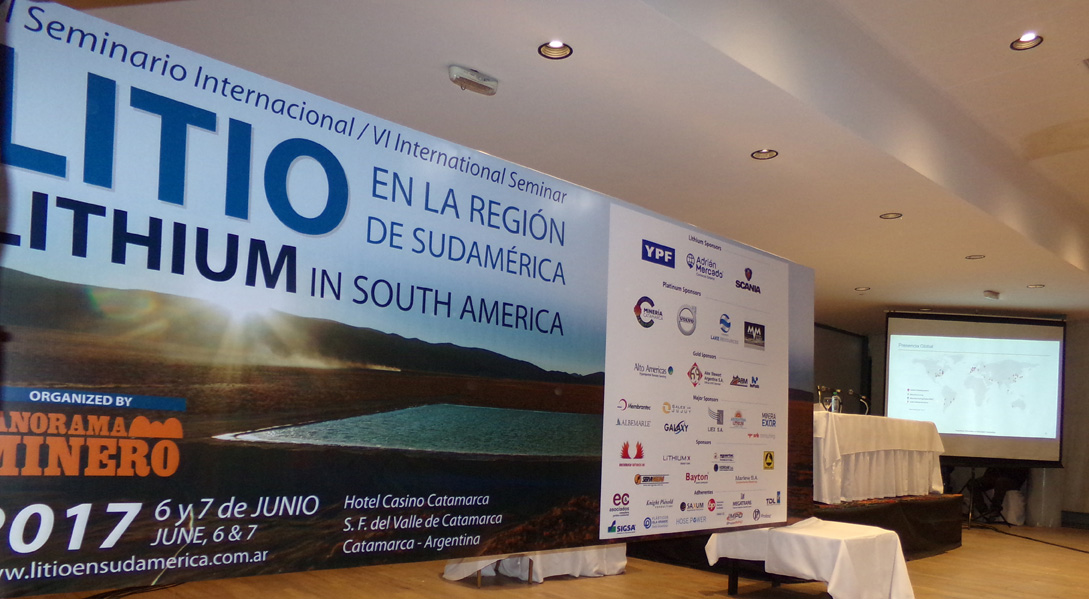 More than 500 people attended this well recognized and consolidated seminar, including mining companies –producers and explorers-, goods and services suppliers, members of diplomatic branches in Argentina, also as national, provincial and municipal authorities. Mining chambers, members of universities, R&D institutes were also present in a seminar that grows year after year.

Dr. Alejandro Colombo, Journalist Director of PANORAMA MINERO offered the welcome words, informing about the Argentine mining potential in terms of lithium, and its importance throughout the Argentine Northwest region. Subsequently, Dr. Daniel Galli, President of the Seminar, stressed the importance of this meeting as well as the themes to be developed.

For his part, Dr. Julio Ríos Gómez, President of SEGEMAR (Argentine Mining Geological Service), commented on the progress of the tasks from this organism to attend technically, as well as the signing of agreements with the People’s Republic of China.

From CAEM (Argentinian Chamber of Mines), Marcelo Alvarez, President of this institution, emphasized the contribution to sustainable mining. “We have lived up to what the President of the Nation proposed for the mining sector, to be one of the pillars of development.” In that sense, he pondered the importance of the TSM (Towards Sustainable Mining) for companies to apply the same standards as in their origin countries.

Rodolfo Micone, President of COFEMIN (Federal Mining Council) and Mining Secretary of Catamarca, said: “Today you can see the fruits of a lot of work. We always said that we wanted to value our resources and today we see it reflected in several projects that are in the province in the production and exploration stages. We want to go further and move forward in the chain value of these minerals.”

Daniel Meilán, National Mining Secretary, said that “Twenty years ago the so called “Great Mining” began in the province of Catamarca with Bajo la Alumbrera and with FMC Minera del Altiplano S.A. in the Salar del Hombre Muerto. Much remains to be done and to generate confidence for the investor. The only way is by doing responsible mining where we are all part and fulfill our functions. ”

Finally, the Seminar was formally inaugurated with the words of the Governor of the province of Catamarca, Dra. Lucía Corpacci, who remarked: “We plan sustainable mining, with work for our people, with respect for the environment and transparency of actions that are made. We want communities to develop and local entrepreneurs also have the opportunity to develop and grow.”

Some of the topics included in the conferences:

Be the first to comment on "“Lithium in South America”: More than 500 people attended the most important lithium seminar in the region"