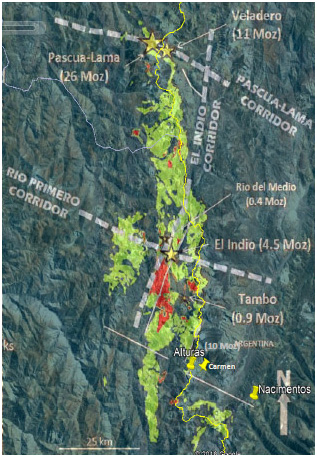 The Nacimientos Project is the Company’s newest exploration project and is a district-scale land package that extends over approximately 15,000 hectares and covers at least six distinct porphyry copper-gold and epithermal gold targets. The project area is located approximately 80 kilometres south of Barrick Gold’s Veladero Mine and is within a possible extension of the prolific El Indio-Veladero gold belt that hosts past production and current resources of more than 50 million ounces of gold.

Three diamond drill holes were completed in April 2018, during the last few weeks of the field season. The holes provided an initial test of three out of six target areas identified earlier this year. Two holes, NADH001 and NADH003, confirmed the presence of extensive porphyry copper-gold mineralization associated with an open ended 4 x 2 kilometre copper-gold anomaly. A third hole, NADH002, confirmed the presence of epithermal alteration under unaltered cover rocks. All three scout holes tested multi-kilometre scale targets and were intended to prove geological concepts rather than to be definitive tests.

Commenting on the results from Nacimientos, Wojtek Wodzicki President and CEO of NGEx stated; “We are very encouraged by these early results from Nacimientos. This was a quick, end-of-season drill program designed as an initial test of geological concepts which has now confirmed the presence of a significant porphyry copper gold system and a large epithermal system under younger cover rocks. The encouraging results at Nacimientos are an important first step that will guide further exploration that we expect will lead us into the core of the system.”

This initial success has encouraged the company to plan further drilling, to better define these zones, test a minimum of three other targets, and to vector into the higher-grade parts of the system. This Phase II work program is scheduled to begin later in the year. 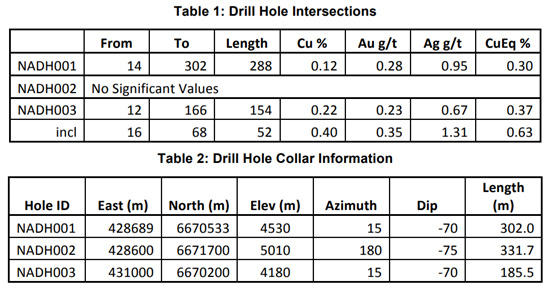