NRG Metals Inc. provided and update on drilling at the Salar Escondido Lithium Project (Catamarca province). The second drill hole at the project was completed to a depth of 400 meters; the hole was enlarged by reaming, and plastic perforated casing was installed to a depth of 371 meters, which is the depth to volcanic rocks interpreted to be the basement. 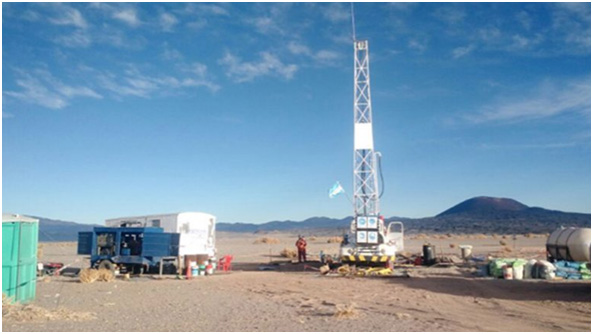 Sampling commenced at a depth of 50 meters, but strong artisanal pressure was encountered when pumping started. The initial artesian flow was a dirty brown, foul smelling, salty brine. The flow gradually diminished and stabilized, and after 3.5 hours of pumping, the brine became clear. A total of 1,000 liters of clear brine was collected, and samples were taken from the stabilized brine. After the samples from 50 meters were collected, the hole became blocked at a depth of 100 meters, and a sample was taken at 100 meters using a Snap Sampler™. Because of the blockage at 100 meters, it was not possible to collect any samples below that depth. The results of the samples are shown in the following table.

A vertical electrical sounding survey completed in 2016 by the Company identified a highly conductive zone starting at a depth of about 100 meters. The results from this hole as well as the hole completed in 2017 have confirmed the presence of lithium in highly permeable clastic rocks, mainly sandstones and conglomerates. However, due to difficult drilling conditions, no brine samples were obtained in this hole from the primary target zone from 100 to 370 meters.

Salar Escondido is proving to be a challenging exploration environment, and the Company is reviewing the data in order to formulate its plans for future exploration, also as reviewing its underlying property agreements. While the presence of lithium in highly permeable host rocks has been confirmed in two holes, there is considerable variation in the lithium grades and the Mg/Li ratios, and only a very small portion of this large and unexplored lithium brine basin has been partially tested.

Be the first to comment on "NRG Metals: Update on Drilling at the Salar Escondido Project"