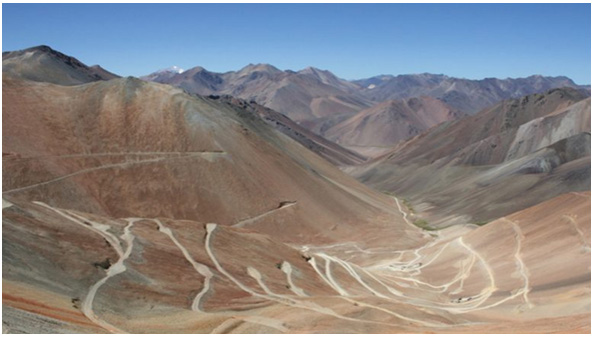 Regulus Resources Inc. announced that it has entered into an arrangement agreement to spin out its Argentine assets, including the Rio Grande and Aguas Calientes projects, into a newly formed company, Aldebaran Resources Inc. Under the terms of the Arrangement Agreement, Aldebaran will enter into a joint venture and option agreement with Stillwater Canada LLC, an indirect subsidiary of Sibanye Gold Limited, to acquire up to an 80% interest in Peregrine Metals Ltd.

John Black, CEO and a Director of Regulus, stated: “The Altar Project already has a very large copper-gold resource and we see the potential to materially enhance the value of the project through further discovery and delineation of higher-grade zones. The agreement with Sibanye-Stillwater is designed to provide immediate benefits to shareholders of both companies as well as exposure to significant future upside potential from an attractive portfolio of exploration projects.”

Neal Froneman, CEO of Sibanye-Stillwater stated: “We believe Aldebaran possesses the vision, skills and experience to unlock the considerable upside potential of the Altar Project, in which we will continue to hold a meaningful interest. Consistent with our vision, we believe this partnership with Aldebaran will deliver value for all stakeholders, as the Altar Project is progressed up the value curve”.

Transaction is expected to occur in the third quarter of 2018.

The Altar Cu-Au (Copper-Gold) Porphyry Project is located in San Juan Province, approximately 10 km from the Chile-Argentina border and approximately 180 km west of the city of San Juan (See figure 1). The operating Pelambres copper mine of Antofagasta Minerals is located approximately 25 km to the south (in Chile) and other nearby large porphyry copper projects include El Pachon (Glencore) and Los Azules (McEwen Mining) in Argentina. Altar hosts a large porphyry copper-gold system with mineralization currently defined in three distinct zones – Altar East, Altar Central and the recently discovered QDM-Radio Porphyry zone, about 3 km to the west of Altar Central. Mineralization at all of these porphyry deposits is associated with Miocene intrusive centers emplaced into Miocene volcanic rocks and is dominantly copper or copper-molybdenum. Altar is noteworthy for having relatively higher gold grades associated with the copper mineralization compared to the aforementioned nearby porphyry systems. 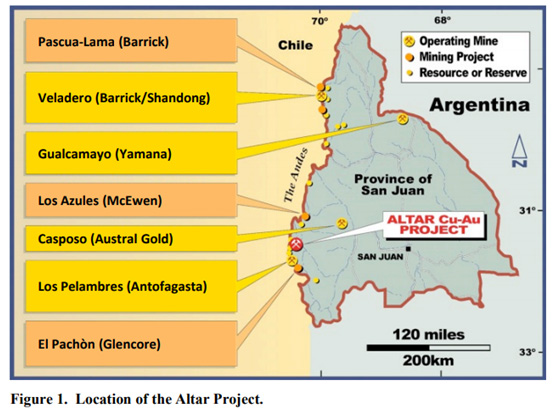 The Altar Project was first explored and drilled by CRA/Rio Tinto (7 holes – 2,841 m) in 1995-2004. Peregrine, a Canadian exploration company, subsequently optioned the property from Rio Tinto in 2005. Peregrine expanded the property and completed 56,761 m of drilling in 146 drill holes from 2005-2011 to define an initial mineral resource estimate at Altar Central and Altar East.

In 2014, Stillwater refocused on platinum group metals production and Altar was determined to be a noncore asset. Exploration at Altar has been fairly limited since that time with principal activities in 2014 and 2015 limited to surface mapping and the collection of baseline environmental data. A smaller drill campaign in 2016 (4,931 m in 8 holes) resulted in the discovery of the upper QDM zone, which is dominantly a gold stockwork zone with minor copper values. Additional limited drilling in 2017 (5,630 m in 7 holes) further defined the QDM zone and discovered higher grade copper-gold mineralization at depth.

Mineralization at Altar remains open in several directions laterally and to depth with multiple holes terminating in higher grade copper-gold mineralization (See figures 2 and 3). Aldebaran believes that there is potential to expand these areas of higher grade.

Sibanye acquired Stillwater in 2017 and the Altar Project was further deemed to be non-core to Sibanye-Stillwater.

Regulus subsequently completed an extensive review of the project and entered into discussions with Sibanye-Stillwater which led to the current agreement. Sibanye-Stillwater has completed additional drilling at Altar in the period of February to May of 2018 (4,923 m of drilling in 3 new holes and one extension of an existing hole).

The Rio Grande Cu-Au-Ag-Mo Porphyry Project is 100% owned by Regulus and is located in Salta Province in NW Argentina. It is favourably located along the prominent NW-trending Archibarca Lineament which also controls the location of the world-class Escondida porphyry Cu deposit (BHP-Billiton), 150 km to the west-northwest in Chile. The Rio Grande deposit is located approximately 80 km due south of the large Taca Taca porphyry Cu-Mo deposit (First Quantum Minerals) and approximately 10 km west of the Lindero Au porphyry deposit (Fortuna Silver). Cu-Au-Ag mineralization at Rio Grande is hosted within a Tertiary intrusive-volcanic complex and occurs within a distinct 2-km diameter ringshaped fracture zone defined by IP chargeability, as well as Cu- and Au-soil geochemical anomalies.

Regulus completed extensive additional drilling in 2011 and 2012 at Rio Grande (39,995 m in 48 drill holes) and a short drilling program was completed at the nearby Cerro Cori target in 2013-14 (1,200 m in 4 holes). Results from those drill programs have previously been released by Regulus. In 2012, Regulus merged with Pachamama Resources to acquire a 100% interest in the Rio Grande project. Activities at Rio Grande have been suspended since 2014 as Regulus has focused on the Anta Kori Cu-Au project in Peru.

Be the first to comment on "Regulus Resources: Spin-Out of New Company, Aldebaran Resources, with an Option to Acquire a Majority Interest in the Altar Copper-Gold Project"